Last weekend I was attending Ciucas X3 mountain marathon, not as a contester of course, but part of a volunteer team of fellow hams to provide emergency communication across the trail. There were about 600 participants for 21 km, 42 km and 105 km routes in the Ciucas Mountains, on heavy paths and big rocky heights.

Our main interest was the ultra-marathon, 105 km, were they had 54 participants, and a 24 hours deadline to complete, and most of the track was going into remote places, overnight, without mobile signal or possibility to use mountain rescue communications, thus ham radio came to rescue 🙂 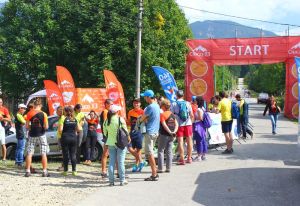 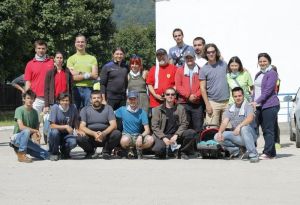 So, on Friday early morning I packed up all my gears and drove to the small town of Cheia, Prahova county, 240 km away from my place. About one third of the road was covered with fog that morning, but I managed to make it there on time to meet Razvan YO9IRF, Vlad Yo3IHG and Octavian YO3IPT, with whom I went climbing to the Gropsoarele Peak, 1884 m, for the maintenance of the UHF repeater that will helps us next day.

We placed the repeater two years ago there, inside an unused old earthquake measuring station, but being at high altitude, and with heavy winters, snow, wind, it was partially damaged, the antenna was broke, same was with the coax, so this were need to be replaced. There we met Gore YO3IGR, Doru YO3HTB, Aurel YO3IBZ and Marian YO3GSK who were climbing on another path, from Ciucas cabin. 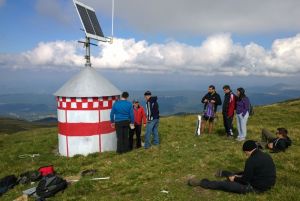 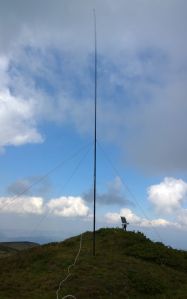 First I tried calling CQ on 20m, and after a few minutes the first call came, EI9GLB, who also spotted me on the cluster. For the next 20 minutes I was busy handling the small pile-up, and the result was 27 contacts with EU contacts only. Then I tried calling on 17 m and 15 m, but after 10-15 minutes of continuous CQ-ing on each band, no takers. 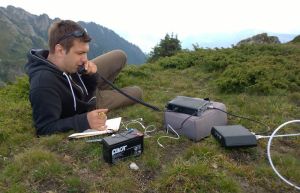 Later, a heavy wind came, and the temperature was going a little bit down, so I packed up the gears. Meantime the guys were almost finishing repairing the repeater. So after a quick group photo we get on the move to our lodges down the hills, and then to the technical meeting with the marathon organizers. 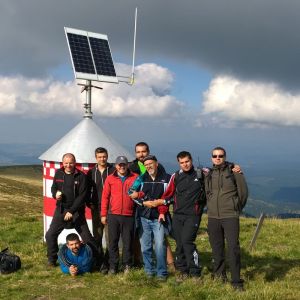 Next day the trail running started at 6 o clock AM. There were 15 checkpoints along the route plus the base station at Start, and in most of them there was one of us to provide emergency communication in case someone gets injured, is lost somewhere in the wildness or any other critical situations. 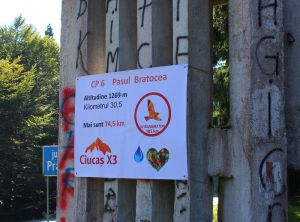 I was assigned at the 6th and 10th checkpoints, those in which the trail route passes the main road. First was the Bratocea Pass at 1269 m. First contesters came here at around 10.00 AM, 30.5 km away from the start point, till about 13.00 PM, when the last one came. One guy got injured at Checkpoint 7 and a 4wd vehicle went to pick him up and brought him back here, and they went again up on the mountains to carry some volunteers to their checkpoints. So after this checkpoint was closed I drove to my next one, CP10, and carry the injured one with me, leaving him at the base station in Cheia which was in my way.

Next checkpoint, CP10, was at Maneciu water dam, at 59 km away from the start, and 46 more to go. When I arrived at about 15.00, the first two contesters were already there, having a quick food and refreshers break.

At this point a lot of them are abandoning. The last kilometers till the finish line are the worst. They have to climb a lot of the trail, on rocky peaks, and mostly at night. From 54 participants at start, only 42 of them passed this checkpoint.

And some herbivore marathoners going to their homes after a whole day of trekking.

I was using a portable FT-60R most of the time, but here at the dam, very far away from the repeater and no visible clearance because of the high hills I was using the FT-817 with the SLA battery and a mobile antenna. The result were satisfactory. 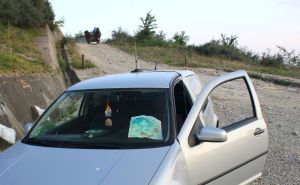 It was a great experience in the end, the weather was fine all weekend, and nice people met there, also a good exercise for us in using amateur radio on emergency situations. Hope next year I will make time and join again.